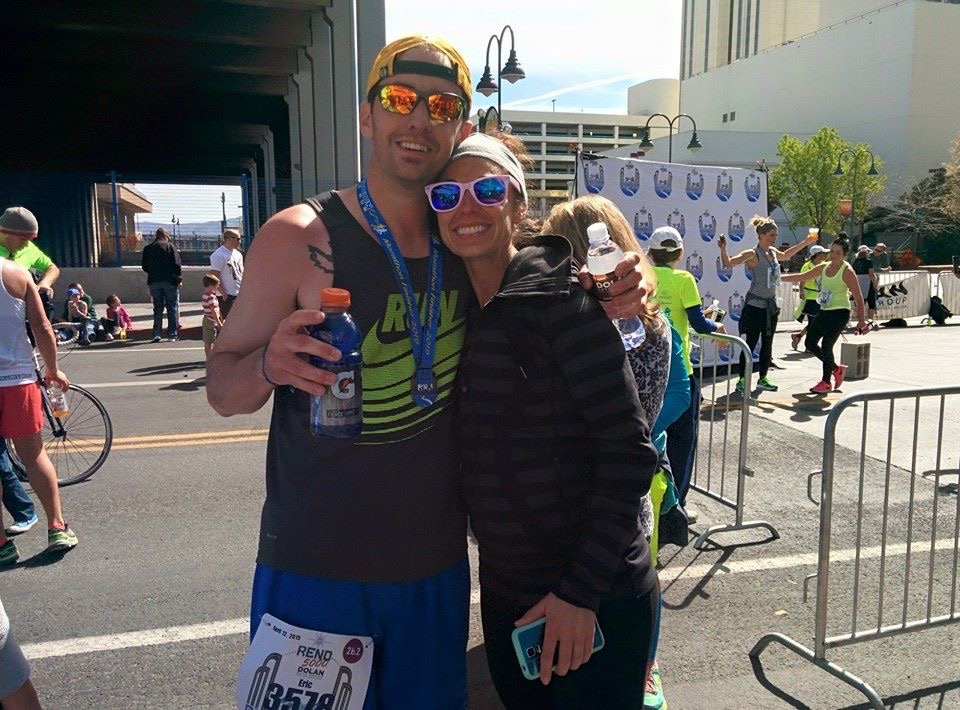 Eric and his wife, Janelle.
I was born and raised in the Reno area.  After high school I joined the United States Marine Corps.  One of the most important traits I learned in the military was the importance of helping people who couldn't fight for themselves. I served my 4 years and was honorably discharged after serving a tour in Iraq.  I started my career at Hidden Valley Country Club in Reno, NV where I met a good friend, Mark Caldwell.  Mark is retired from the Washoe County Sheriff's Department.  Mark had two grandchildren, Wyatt and Olivia.  Olivia was diagnosed with cancer shortly after I met him. He and his wife were constantly making trips to Wyoming to help and be with family. I always wanted to help him and his family, especially after I found out that my girlfriend Janelle was pregnant.  Mark maintained a positive attitude and remained strong for his family even though he was constantly in tears while talking about it.

When Olivia passed away around 20 months old, it was devastating to everyone around Mark, including my family.  It felt like we were on the journey with them since we were in such close communication with Mark.  There were fundraisers for the Olivia Caldwell Foundation. I knew there had to be some way for me to contribute to the family, foundation, and my friend.

During this time I had been roped into racing in triathlons, half marathons and various endurance events with my now wife, Janelle.  I then started training for my first full marathon.  Running for 3 hours at a time gives the mind plenty of time to think about life.  In the middle of my training, I was running by myself, thinking of how lucky I am to have a beautiful daughter, Bella, and my wife, Janelle. I had no idea if I could ever have the strength that the Caldwell's have after enduring something so tragic.  I decided it was time to do something for them. Looking at myself, I had to find something I was good at.  I was slowly discovering my abilities as an endurance athlete, and it was then that I decided to run an Ironman triathlon and raise money for every mile I trained.

I will be training for an entire year and raising money in several ways for the Olivia Caldwell Foundation.  I hope to get the community involved to help support pediatric cancer.  If Bella was ever diagnosed with this terrible disease I would hope that somebody would get involved and help my family in our time of need. I have never met Brett or Katie who are Olivia's parents, but I don't have to know them to show my support and love.

Before my journey starts, I want Janelle and Bella to know that I love them. Training for a year for something like this will be a huge commitment for them as well.  Janelle agrees to sacrifice time with her husband to help others and even though Bella won't understand now, hopefully in time she will learn from this that we all need to help each other to make the world a better place.

I hope to raise enough $10-15,000 for pediatric cancer research so I can truly make a difference and get the community to rally behind these children who deserve a chance. I also look forward to meeting Brett, Katie and Wyatt at Ironman Coeur D Alene 2017. ​